What’s in a Generic Name? Clues About the Drug’s Use and Possible Adverse Effects

Since 1961, the United States Adopted Names (USAN) Council has been responsible for selecting simple, informative, and unique nonproprietary drug names based on pharmacological and/or chemical relationships.1,2 For pharmaceutical companies, obtaining a generic name is required before bringing a new drug to the market. Today, there are 5 members of the USAN Council, including the American Medical Association (AMA), United States Pharmacopeia (USP), American Pharmacists Association (APhA), US Food and Drug Administration (FDA), and a member at large. ISMP also has an important role with USAN by identifying medication errors that have been tied to nonproprietary drug names.

At the crux of the USAN naming process is the collection of standard stems used as prefixes, suffixes, and infixes to identify the pharmacologic property and/or chemical structure of the medication, or both. Sometimes, the standard name stems used for nonproprietary drug names can lead to name similarities that cause mix-ups among the various drugs with the same stem. However, the stem helps position an unfamiliar drug with others in a class and provides clues as to its use and effects. For example, drugs ending in the stem -olol belong to the class of drugs known as beta blockers. Some examples of beta blockers available in the US include atenolol, bisoprolol, esmolol, metoprolol, and propranolol. While this class of drugs may be used to treat a variety of conditions, in general, a drug with an -olol stem in its generic name is often used to treat heart failure, cardiac arrhythmias, and hypertension, and shares similar adverse effects, like bradycardia and hypotension.

Another example is the group of drugs ending with the stem -oxetine used for antidepressants (FLUoxetine type). Examples of drugs with this name stem include vortioxetine (TRINTELLIX), FLUoxetine (PROZAC), and PARoxetine (PAXIL). These drugs are selective serotonin reuptake inhibitors (SSRI). They work by increasing levels of the neurotransmitter serotonin in the brain by blocking their reabsorption or reuptake. These drugs are used for various psychiatric disorders such as depression, anxiety, and obsessive-compulsive disorder. They share many of the same side effects.

Once the nonproprietary names are built using the appropriate stem and other conventions, occasionally the pharmaceutical company supplies a syllable or two that may be meaningful to the drug development process. For example, the multiple myeloma drug carfilzomib (KYPROLIS) includes the stem -zomib reserved for proteasome inhibitors, and is also named after molecular biologist Philip Whitcome and his wife, Carla, who both died from cancer (“fil” instead of “phil” was used for Phillip to make the drug name globally compatible).3 Dasatinib (SPRYCEL) includes the stem -tinib reserved for tyrosine kinase inhibitors and is also named after research fellow Jagabandhu Das.3 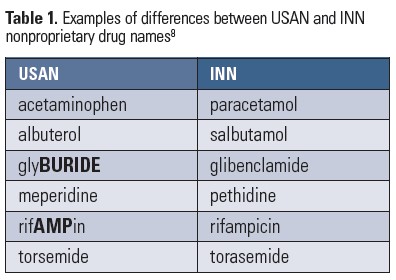 International Nonproprietary Names (INN) Program so that a single, acceptable worldwide generic name is used when communicating drug names. The single generic name also facilitates communication in global professional journals and research. The INN system began operating earlier than USAN in 1950, when the first list of INN for pharmaceutical substances was published.4 With few exceptions (Table 1), nonproprietary drug names used in the US are the same as those adopted for use outside the US by the INN.

Understanding the clues found in nonproprietary drug names is much like learning English vocabulary by studying Greek and Latin roots—learn what the stem means and you’ll have clues to help understand what the drug does and how it affects the body.3 Unfortunately, not all healthcare professionals involved in the medication-use process have been taught to recognize drug name stems. Generic names may be a mystery requiring brute memorization, and these healthcare professionals may not associate the drug with potential adverse effects within a certain class of drugs. Some healthcare professionals may have received extensive education during academic and clinical training regarding medications, including pharmacology, therapeutic uses, possible adverse effects, and potential interactions, but the drug nomenclature and importance of stems may not have been stressed.

How ISMP and pharmacists can help

There are hundreds of drug name stems and subgroups of these stems used by USAN and INN. For example, the general stem -cept refers to receptor molecules, and the subgroups define the targets (e.g., -farcept for interferon receptors, -vircept for antiviral receptors). New stems are constantly being created for novel pharmacologic categories of medications.5 Exhaustive lists for healthcare professionals may not be helpful, nor are lists that describe the meaning of drug name stems in terms that may not be understandable to all healthcare professionals without extensive training in pharmacotherapy (e.g., phosphodiesterase-5 enzyme inhibitors for -afil [e.g., tadalafil]). However, pharmacists can help provide other healthcare professionals with information about the stems associated with the most common drugs prescribed or administered within their specialties, along with the stems for drugs used to treat common chronic conditions. Short educational programs covering a few stems at a time related to a specific class of medications are recommended. This should be accompanied by information regarding the clinical effects and common or dangerous adverse effects found within each class of drugs.

To this end, ISMP also plans to begin a regular series of short features in the ISMP Nurse AdviseERR and the ISMP Long-Term Care AdviseERR highlighting common drug name stems to promote their recognition and understanding of the many benefits that healthcare professionals receive when they understand this common language. ISMP is borrowing the idea from an outstanding effort that is already underway in the French publication, Prescrire International, a subscription-based journal provides reliable, independent information that enables fully informed decision-making about medications.6 The journal, which has long advocated the use of the INN as an important tool in the appropriate use of medications, also offers a free Independent Drug & Healthcare Newsletter.7