Our 2021 survey was completed by 1,047 respondents—995 who worked in an acute care setting and 52 who worked in a long-term care (LTC) setting. More than half of the respondents worked facility wide (28%) or in the pharmacy (26%); however, respondents from critical care (9%), general units (9%), perioperative locations (5%), emergency departments (4%), behavioral health (4%), and ambulatory or other special care units (15%) also participated in the survey. The respondents were mostly nurses (42%) and pharmacists (37%); however, we also received survey responses from pharmacy technicians (6%), quality/risk/safety practitioners (5%), physicians (3%), and others (7%, therapists, administrators, nursing assistants, education specialists). Sixty percent of the respondents were staff-level practitioners, and about one-quarter were managers, directors, or administrators (28%). Examples of other types of practitioners (12%) who participated in the survey included medication safety officers, faculty, clinical specialists, residents/fellows, and consultants. The vast majority (96%) of respondents had 2 or more years of experience in healthcare, with 68% reporting more than 10 years of experience; only 4% of respondents had less than 2 years of experience.

Frequency and Types of Disrespectful Behavior

Offenders were frequently more senior in position (rank) than the target for these four disrespectful behaviors:

When respondents were asked to specify the three most frequently encountered disrespectful behaviors during the past year, more than half included the following:

Although the following three disrespectful behaviors were, overall, among the least frequent behaviors encountered, it is troubling that more than one in 10 respondents told us at least one of these behaviors was among the three most frequently encountered during the year: 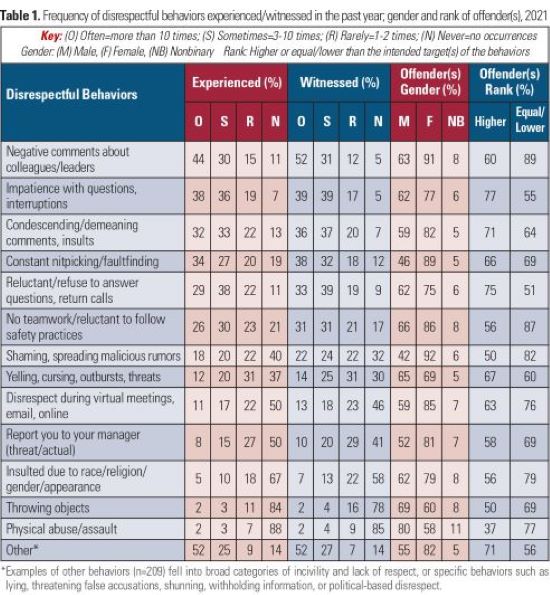 Unsafe practices, medical errors, and adverse patient outcomes can be clearly linked to disrespectful behaviors in healthcare. For example, in the 2021 survey, more than one in three respondents (40%) told us that their past experiences with disrespectful behaviors had altered the way they handled order clarifications or questions about medication orders. At least once during the past year, approximately half (51%) of the respondents had asked colleagues to help interpret an order or validate its safety to avoid interacting with a particular prescriber—11% reported this occurred more than 10 times throughout the past year (Table 2). Forty-one percent of the respondents had asked another professional to speak to a particularly disrespectful prescriber about the safety of an order at least once during the year, and nearly half (47%) admitted to feeling pressured to accept an order, dispense a product, or administer a drug despite concerns about its safety. At least once during the past year, more than one-third (35%) of the respondents had concerns about a medication order but assumed it was correct rather than interact with a particular prescriber. Similar results were reported when the prescriber’s stellar clinical reputation led to a reluctance to question or clarify orders despite having concerns. 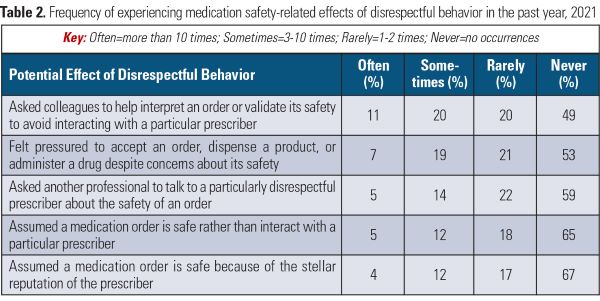 Furthermore, more than one-quarter (27%) of the respondents were aware of a medication error in the past year in which disrespectful behaviors played a role. Nearly 200 events were described by the respondents; see Table 3 for a few examples. Many of the described events involved high-alert medications (e.g., neuromuscular blocking agents, anticoagulants, insulin, chemotherapy) and led to significant delays in care and/or serious adverse outcomes.

Have Disrespectful Behaviors in Healthcare Lessened?

The results of our 2003 and 2013 surveys painted a grim picture of a hostile work environment in which disrespectful behaviors continued to erode professional communication, which is imperative for patient safety. Unfortunately, the 2021 survey results suggest that disrespectful behaviors in healthcare continue to occur at an alarming rate, demonstrating little or no improvement, and in some cases, worsening. In 2021, respondents reported that disrespectful behaviors persist unchecked, they are not isolated events, they are not limited to only one or two offenders of a single gender, and they occur in both lateral (peer-to-peer) and hierarchical working relationships.

When comparing the 2021 results to our 2003 and 2013 survey results, the prevalence of most disrespectful behaviors included in the surveys generally stayed the same or increased (Table 4), with the most noteworthy increase between 2013 and 2021 in making negative comments about colleagues and leaders. Responses from the 2013 survey participants suggested that some types of disrespectful behaviors lessened between 2003 and 2013, particularly impatience with questions and the use of condescending or demeaning comments and insults. However, 2021 respondents reported that both of these disrespectful behaviors rose in prevalence since 2013 to nearly or above the 2003 reported prevalence levels. 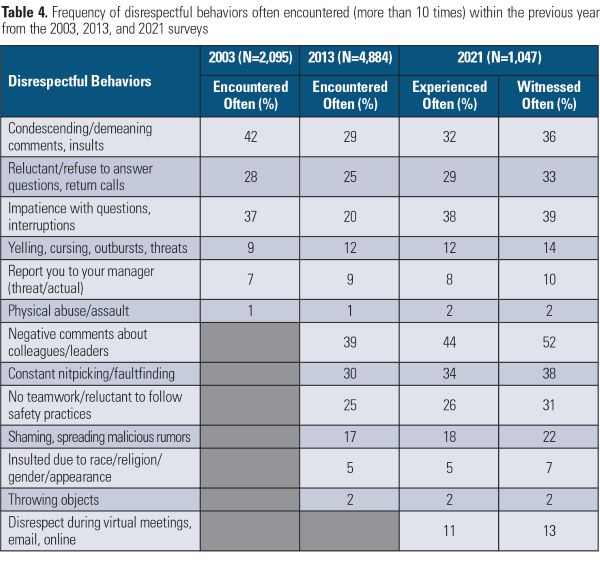 The 2021 survey results and the deep sense of frustration threaded through many of the comments from the survey suggest that now is the time for action. In Part II of our report, we will provide recommendations to help address this longstanding problem. In preparation, we would love to hear from organizations that have been working towards a culture of respect and learn more about what strategies have worked. Please send a message to: ismpinfo@ismp.org, if you would like to contribute to the dialogue on this important issue.