A hospital pharmacist reported two instances of inadvertent intravenous (IV) administration of oral liquid products. The events can be linked to several contributing factors that have repeatedly been reported with this type of wrong route error, including preparation of oral liquid products in parenteral syringes, unlabeled syringes, and a break in mental concentration due to multitasking and distractions. In many prior events, the inadvertent IV administration of an oral product has led to patient harm, given the risk of sepsis, emboli, or diffuse intravascular coagulation when injecting an unsterile solution with particulates. The patients involved in these recent errors required a prolonged hospitalization due to the error, but, fortunately, neither suffered any known permanent harm.

Oral or enteral medications were prescribed for a 49-year-old postoperative patient who could not swallow tablets. Prior to the patient’s transfer to a rehabilitation facility, he needed a dose of oral LORazepam. The nurse, who had many years of experience, retrieved the medication from an automated dispensing cabinet (ADC). When removing the oral syringe of medication from its packaging, she misinterpreted the controlled substance schedule IV (C-IV) indication on the label to mean IV (intravenous). A flag-style label was affixed to the syringe (Figure 1), and by chance, C-IV was on one side of the folded label, and the words ORAL and ORALLY were on the other side. 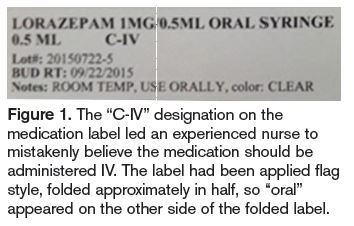 The nurse may not have turned the syringe to see both sides of the folded label. She scanned the barcode on the medication package and then attempted to connect the oral syringe to the patient’s IV access port. When it would not connect, she transferred the medication to a parenteral syringe and administered the drug through an IV access port, which she then removed. The patient was transferred to the rehabilitation facility. Shortly after discharge, the error was discovered and the patient was returned to the hospital for observation and monitoring. The patient was transferred to the rehabilitation facility the following day. The nurse reported that she was very busy at the time of medication administration, with frequent distractions while simultaneously preparing several patients for discharge.

A physician prescribed chlorhexidine mouthwash 4 times daily for a 38-year-old patient who was hospitalized for extensive oral surgery. The pharmacy dispensed single-use, prepackaged cups of the mouthwash. For this dose, the patient asked the nurse to draw the mouthwash into a syringe for self-administration. The nurse scanned the barcode on the tub of mouthwash and then drew up approximately 6 mL in a 10 mL parenteral syringe because oral syringes were not available on the unit. She laid the syringe on the patient’s bedside table but did not label it. The nurse also prepared a saline flush for the patient’s saline lock, scanned the barcode on the flush syringe, and then also set the unlabeled syringe on the patient’s bedside table. The nurse became distracted by other pressing tasks in the patient’s room and completed them before returning to the bedside table to administer the IV saline flush. The nurse thought the syringe containing chlorhexidine was the saline flush and injected it into a peripheral catheter in the forearm. The patient complained of stinging. The nurse immediately realized the error, flushed the line with normal saline, and removed the IV catheter. Local pain continued overnight but no sequelae were identified. The patient was discharged the next day.

These cases reflect the impact of system vulnerabilities, at-risk behaviors, human factors, and technology limitations. In the chlorhexidine event, oral syringes were not available on the unit to prepare oral solutions for administration, so a parenteral syringe was used. In both cases, the nurses were distracted from the immediate task at hand and lost situational awareness. One of the nurses failed to label the syringe containing mouthwash. The other nurse failed to read or interpret the LORazepam label correctly, failing to notice “USE ORALLY,” which was in a less prominent area of the label, away from the drug name, and misinterpreted C-IV as the IV route of administration. This nurse fell victim to an anchoring heuristic, a type of subconscious mental shortcut in which one piece of information—in this case, the prominent term C-IV—became stuck in her mind as the route of administration. All other clues that something was amiss were subconsciously silenced, including the inability to connect the oral syringe to the IV port. In both cases, the patient identification and product barcodes were scanned using the proper, established procedures. No warning or alert was generated because, in both cases, the right products were scanned for the right patients at the right times. But after the scanning process, one nurse transferred the medication to a parenteral syringe, and the other nurse delayed administration, which introduced new sources of error.

While it is not possible to design systems to perfectly prevail over human nature, there are numerous behavioral choices and system improvements that can reduce the likelihood of similar events.

Step back and reassess. Raise the index of suspicion when there is any sign, no matter how subtle, that something may be amiss during medication preparation or administration. If something doesn’t seem right or doesn’t “fit” (e.g., a syringe won’t attach to an IV port), the clinician should reassess the situation. Suspect an error when looking for reasons for the amiss situation, and don’t make assumptions without due diligence to pursue alternative explanations. Asking a second person to help troubleshoot the issue can counteract an anchoring heuristic, as a fresh set of eyes can often see something the first person could not.

Reduce distractions and interruptions. While distractions and interruptions in healthcare cannot be fully eliminated, there are steps that can be taken to reduce their occurrence and impact during the medication use process. Identify the sources of common interruptions and remedy any system issues such as frequently missing medications or untimely dispensing of medications. To minimize task disruption, ensure that all needed supplies and documents are available before prescribing, preparing, or administering medications. When a clinician is faced with multiple demands at once that require attention, ask for help if possible from a charge nurse, colleague, or supervisor. When able, avoid interruptions during the most complex parts of a task.

Reinforce labeling policies. Staff may not appreciate the reasons for stringent syringe labeling policies, particularly when only one product has been prepared and the intent is to administer it immediately. While clinicians may think that the syringe will never leave their hands, interruptions and distractions will inevitably change the order of priorities, and the unlabeled syringe may be put down temporarily. All prepared syringes should be labeled unless they are prepared at the bedside and immediately administered. The contents of a syringe, bag, or sterile basin should never be assumed, even if the same person is preparing and administering the product.

Design labels without misleading clues. Pharmacy labels should be critically evaluated for the potential of misinterpretation. Assume that, if something can be misread or misinterpreted, it will be. In this case, the term C-IV was in bold type and near the product name. Nurses may not be aware of the different abbreviations used for classes of controlled substances; if a notation must be on the label, C-4 may be a safer choice than C-IV.