The latest annual report of ISMP’s QuarterWatch™ analyzes more than 1.2 million new adverse drug event reports submitted to the US Food and Drug Administration (FDA) Adverse Event Reporting System (FAERS) during 2016. Part I of this newsletter feature, which appeared in the July 13, 2017 issue, examined drug withdrawal symptoms reported by large populations of patients who have stopped taking opioids, antidepressants, and certain neuropathic pain, antianxiety, and sedative/hypnotic medications. In Part II, we examine the high risk of acute injuries linked to oral anticoagulants and outline five practical measures to improve safe use.

Harm from oral anticoagulants ranks as one of the highest priority drug safety problems in 2016 by several measures. First, in clinical trials, these drugs have repeatedly demonstrated high injury rates, causing bleeding in 8% to 19% of patients treated for a year.1-3 Next, anticoagulants are used by a large and growing population, notably the elderly, with an estimated 3.8 million person-years exposure by the end of 2016 based on outpatient prescription data from QuintilesIMS. Overall exposure to oral anticoagulants increased 2.6% between the 4th quarter of 2015 and the same quarter in 2016 (see Table 1). Reports of serious injuries and death also feature prominently in the 2016 FAERS data, as well as in a systematic study of emergency department (ED) visits for adverse drug events conducted by the Centers for Disease Control and Prevention (CDC) and published in late 2016.4 The CDC data show that adverse effects of oral anticoagulants account for more ED visits than any other class of drugs.

What the Data Show

2016 FAERS data. In the 2016 data, anticoagulants continue to account for large numbers of reported serious injuries (n=18,978) and deaths (n=3,018) in the US. The primary suspect drugs were rivaroxaban

(n=15,043; 68.4%), apixaban (n=3,148; 14.3%), dabigatran (n=1,944; 8.8%), warfarin (n=1,753; 8%), and edoxaban (n=108; less than 1%). (Rivaroxaban totals were increased by large numbers of reports with event dates in prior years but first reported to FDA in 2016; reported events for edoxaban were much lower than for the other direct oral anticoagulants and warfarin because of a more restrictive indication and limited patient exposure [see Table 1]). Practically all reported injuries or deaths were from hemorrhages (n=17,218; 78.3%), making bleeding one of the most frequently reported serious adverse drug effects of all types. Gastrointestinal hemorrhages were the most numerous (n=8,495), but we also identified 1,019 cerebral hemorrhages and another 790 possible cases of cerebral hemorrhage. In other cases, the site of bleeding was not identified. The only other notable adverse effect reported with anticoagulants was renal failure and impairment (n=835). 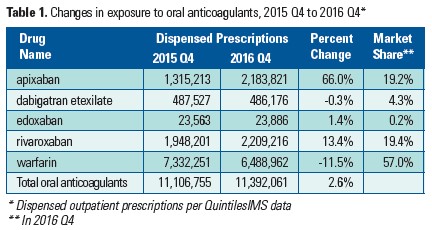 CDC study of ED visits. A recently published CDC study of ED visits from 2013 to 2014 associated with adverse drug events confirms and extends these findings.4 The CDC study showed that anticoagulants accounted for 17.6% of all ED visits for outpatient adverse drug effects, more than any other class of drugs, and 2.4 times more than for opioids used therapeutically. The anticoagulant events were mostly severe, with 48.8% overall requiring hospitalization (63.8% for patients taking dabigatran, 50.4% for rivaroxaban, 48.5% for warfarin). For comparison, 24.6% of patients were hospitalized after an ED visit linked to the therapeutic use of opioids, and 7.1% were hospitalized after a visit due to an antibiotic reaction. Using the CDC data, QuarterWatch™ estimates that 6.3% of patients exposed to an anticoagulant for 1 year will require an ED visit due to the drug’s adverse effects.

The CDC data also illustrate that FAERS voluntary reporting underestimates drug-related injuries that are actually occurring. While not strictly comparable, the CDC’s systematic study shows an estimated 228,600 annual ED visits due to anticoagulants, or more than 10 times the FAERS total number of voluntary reports. Keep in mind that the CDC study only captured outpatient events requiring a visit to the ED. For oral anticoagulants, the study did not capture direct hospital admissions, doctors’ office visits, and out-of-hospital deaths. On the other hand, the reported CDC events included a substantial number of cases in which a patient had an elevated INR and was subsequently sent to the ED to assess overdose risk but did not experience an acute injury.

New anticoagulants took a wrong turn. Since 1954, warfarin has been a standard but hazardous treatment for preventing blood clots, particularly clots associated with atrial fibrillation. When the pharmaceutical industry began marketing modern replacements for warfarin (direct oral anticoagulants), including dabigatran (PRADAXA), rivaroxaban (XARELTO), apixaban (ELIQUIS), and edoxaban (SAVAYSA), they designed them to be easier to use than warfarin but not necessarily safer. While warfarin required frequent laboratory monitoring and individual dose adjustments, the direct oral anticoagulants were tested and approved at only one or two therapeutic doses, with no laboratory monitoring for efficacy required, recommended, or, in most cases, possible. However, two of the four newer anticoagulants proved to be poorly suited to simplified dosing schemes.

Soon after approval of the first agent, dabigatran, QuarterWatch™ raised questions about whether its single therapeutic dose was causing excess bleeding in the elderly. A second agent, rivaroxaban, was marketed for easier once-a-day dosing despite having a shorter half-life than the other direct oral anticoagulants. Other QuarterWatch™ reports, noted that this pharmacodynamic limitation of rivaroxaban resulted in higher than optimal anticoagulation early in the 24-hour cycle, and potentially suboptimal effects later after the body cleared much of the active drug. Based on clinical trials, edoxaban is not recommended in patients with non-valvular atrial fibrillation if they have a creatinine clearance greater than 95 mL/minute because of an increased risk of ischemic stroke compared to warfarin. Only apixaban, with two dosing options that take into consideration patient-specific characteristic such as age, renal function, and body weight, had a credible claim to a modest improvement in safety over warfarin.1

Progress with dabigatran. By the end of 2016, two safety concerns with dabigatran had been addressed, at least in part. It became the first direct oral anticoagulant with an FDA-approved antidote for dabigatran-related hemorrhage. IdaruCIZUmab (PRAXBIND) is a monoclonal antibody that binds to dabigatran, rendering it ineffective. An FDA clinical review of the drug found it was notably effective in returning blood clotting function to normal within 10-30 minutes of infusion.5 While the anticoagulant effect was quickly neutralized, bleeding continued in many cases. The median time to halt the bleeding was 9.8 hours, and one patient bled for 62 days. Of the 123 patients in which the antidote was tested, 26 died despite the antidote. These results emphasize the importance of preventing hemorrhages rather than treating them.

The second dabigatran safety issue that was addressed involved the unavailability of a reduced dose for older patients or those with moderately impaired renal function. In the US, the drug had been limited to a single 150 mg dose (twice daily) and an untested 75 mg dose for patients with severe renal impairment. But in late 2015, FDA authorized an intermediate 110 mg dose, which previously had been available in many other countries, for deep vein thrombosis and pulmonary embolus prevention following hip replacement surgery. (Although US prescribing information still does not recommend the intermediate dose to treat atrial fibrillation, the European Medicines Agency recommends its use in patients 75 years or older and/or with one or more risk factors for bleeding.6) However, by the end of 2016, there was little use of the 110 mg dose in the US, which accounted for less than 1% of dabigatran prescriptions.

From the onset, long-term use of oral anticoagulants exemplified a dangerous balance between a clearly demonstrated benefit in preventing ischemic stroke against the high risk of bleeding and fewer-in-number but substantially increased risk of hemorrhagic strokes. Many healthcare professionals have been willing to risk causing more hemorrhages that can be treated in order to prevent disabling, life-changing ischemic strokes. But, given that few other outpatient drug treatments cause serious injuries to 6% or more patients treated for a year, the need is great to reduce the risks associated with this class of drugs. Some practical steps for FDA, the pharmaceutical industry, and the cardiology/hematology community to take in this regard include

The full QuarterWatch™ report can be found here.

What is QuarterWatch™?
QuarterWatch™ is the publication of an independent ISMP surveillance program that monitors adverse drug events reported to FDA by manufacturers, health professionals, and the public. The agency releases, for research and data analysis, excerpts of all domestic and foreign reports it receives into the FDA Adverse Event Reporting System (FAERS). The goal is to identify signals that may represent important drug safety issues which often require further investigation to determine their frequency and establish a causal relationship to the suspect drug.