In June through August 2017, we invited readers of our acute care, community/ambulatory care, long-term care, and nursing newsletters to complete an online survey about the texting of medical orders in healthcare. We sincerely thank the 778 respondents who completed the survey, which included nurses (40%, n=312), pharmacists (38%, n=299), physicians and other prescribers (7%, n=54), medication/patient safety officers and quality/risk managers (7%, n=53), and others (8%, n=60, educators, pharmacy technicians, etc.). Almost all respondents were from the US (95%) and practiced in a hospital setting (86%). About two-thirds (63%) of the respondents were staff-level practitioners, and the remaining were managers (21%), directors (10%), or administrators (6%).

ISMP conducted this survey to gain insight into the practice of texting medical orders given the ongoing debate regarding its use.1 Technology-savvy healthcare professionals have embraced the convenience of this 21st century form of communication, while opponents feel it is too informal to properly document patient care. They also have concerns about data security and the potential impact on patient safety with texting medical orders. Both sides of the debate offer compelling viewpoints, which were both clearly evident in the survey results of US respondents (n=742) that follow.

Texting opinions. Thirty-three percent of all respondents, and more than half (55%) of all medication/patient safety officers and risk/quality managers, do not believe medical orders should be texted under any circumstances in healthcare. Another 40% of all respondents thought the practice was acceptable only when using an encrypted device application (e.g., TigerText, Doc Halo). While 26% of physicians reported that texting should be allowed in any circumstance, only 15% of nurses and pharmacists, and only 4% of medication/patient safety officers and risk/quality managers felt the same way.

Texting policies and practices. More than half (53%) of all respondents told us that texted medical orders are not allowed per policy in their facility. Most of the other respondents said they had no policy on the topic (19%) or were uncertain whether a policy existed (16%). Only 12% of all respondents reported that texting was allowed in their facility per policy—8% for any orders if using an encrypted device, 3% under any circumstances, and 1% under certain circumstances (e.g., to communicate information other than medication orders, for clarifications only, to alert prescribers to call).

Types of texted orders. For those who thought texted orders should be allowed in healthcare (67%), half thought orders for chemotherapy (50%) and complex order sets (54%) such as those for parenteral nutrition should be prohibited. More than a quarter thought orders for high-alert medications (30%) and controlled substances (29%) should not be allowed. However, in practice, very few types of texted orders were prohibited in respondents’ facilities. Only 9% said that texted chemotherapy orders were not allowed, and only 3% reported that complex order sets could not be texted. Less than 2% reported any further restrictions, although more than half (56%) of the respondents said they were uncertain about restrictions or were unaware of any policy on the topic. Half or more of all respondents felt that these risks, along with the failure to retain or document the text message, and the inability to authenticate the sender/receiver, were of the highest concern. The least concerning risks, which still clearly worried most respondents, included a delay in receipt or transcription of texted orders, and the lack of prescriber clinical decision support while texting. For the latter concern, many respondents commented that nurses who enter the texted order into the prescribing system, and pharmacists who verify the order, should receive any alerts and clarify the orders if concerns arise. However, other respondents commented that the lack of decision support when prescribing could lead to unnecessary variation in practices and transfer responsibility for the correctness of the order from the prescriber to the nurse (or pharmacist). 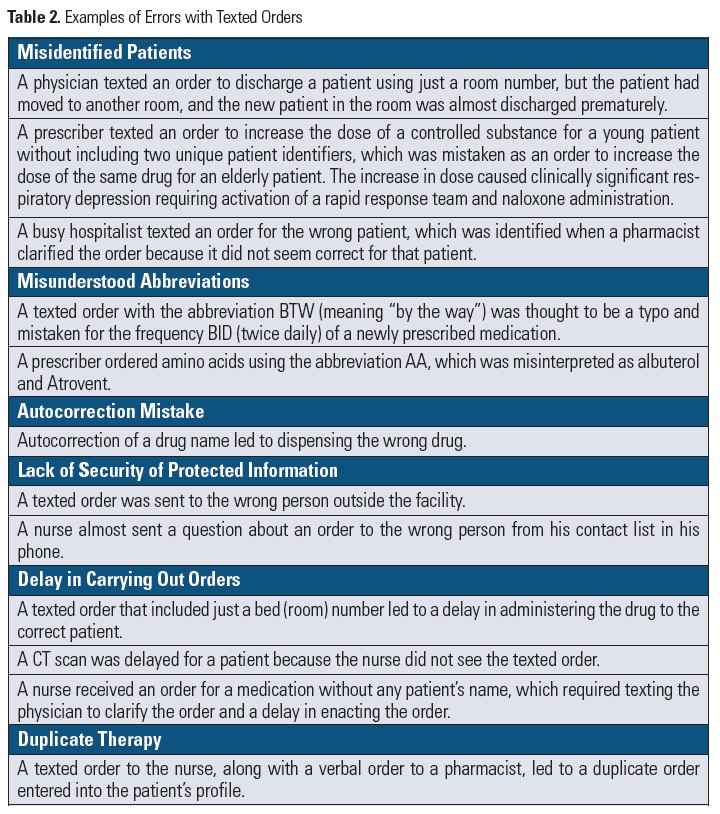 Given that texting is just too convenient, many in healthcare feel that the text messaging of orders is unlikely to go away, despite policies prohibiting their use or the known safety concerns. Our survey results tend to support this conclusion, although more scientifically rigorous research should be conducted to further confirm the scope of current use. The benefits of texting orders are primarily related to its popularity and convenience, workflow synergy and speed, and perception of similar risks when compared to other forms of communicating orders. In fact, numerous respondents to our survey noted that, while texting of medical orders is clearly not as safe as electronic prescribing, it may be safer and more timely than verbal or telephone orders.

We disagree, particularly given that verbal or telephone orders can be read back to ensure accuracy and understanding, and because most practitioners who responded to our survey are texting orders via standard cell phones or devices without encryption or critically important safety features. While other forms of communicating medical orders carry some of the same risks as texting orders, the informal nature of texting orders, often without a known policy or procedure associated with the process, has resulted in uniquely alarming risks, including abbreviated language, improper autocorrection, and texting orders without full patient names and a second unique identifier to offset some data security concerns, to name a few.

The texting of medication-specific orders should not be allowed until the safety issues have been identified and resolved through advanced technology along with the development of vetted, industry-wide clinical guidelines that can be employed in organizations to ensure standardized, safe, and secure texting processes. Leadership must establish and communicate policies on the texting of orders and take a strong stance on avoiding texted medication-specific orders at this time until they can be safely introduced into healthcare through careful pilot testing and implementation plans.