Some hospitals have been working towards interoperability between smart infusion pumps and the electronic health record (EHR) so data can be shared between the two systems. With this level of bidirectional interoperability, infusion parameters are wirelessly transmitted from the EHR to prepopulate the smart infusion pump, and infusion data is also wirelessly sent back into the EHR. Specifically, an infusion order is sent via a computerized order entry system (CPOE) to the pharmacy for verification and then to a smart pump via a barcode medication administration system so the pump can be preprogrammed (prepopulate the infusion status), thereby eliminating manual programming steps. To start an infusion, the nurse first scans the barcodes on a patient’s identification band, the drug/infusion, and the pump or associated pump channel. Infusion parameters are then wirelessly transmitted from the EHR to the pump for the nurse to verify and accept. Programming information is also transmitted back to the EHR, validated by a nurse, and recorded electronically, creating a closed-loop system.

Recently, in a hospital that had implemented bidirectional smart infusion pump interoperability, electronic documentation of a patient’s insulin infusion (1 unit per mL) was being captured and recorded on the electronic flow sheet at two different rates of infusion, 3 mL per hour and 60 mL per hour. The prescribed rate of infusion was 3 mL (3 units) per hour, so seeing 60 mL per hour on the patient’s electronic IV flow sheet was quite startling for staff and made them wonder if the pump was malfunctioning. When staff inspected the pump, it was infusing at 3 mL per hour, the correct infusion rate; however, the wrong infusion rate (60 mL per hour) continued to appear intermittently on the patient’s EHR IV flow sheet. 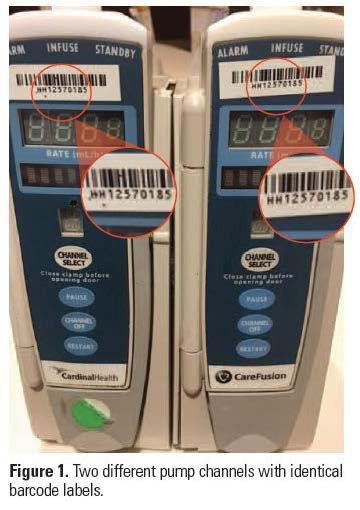 Using radio frequency identification (RFID) technology, the hospital was able to locate the pump channels and identify that the same pump channel barcode was associated with two different pump channels being used for two different patients. The pump channel on this patient was infusing insulin at 3 mL per hour, and the other channel was infusing nitroglycerin at 60 mL per hour (200 mcg per minute) for a different patient. Investigation showed that the organization’s information technology (IT) department had inadvertently identified both pump channels with identical barcodes (Figure 1); one had the correct barcode on it based on the manufacturer’s serial number, and the other had been mislabeled (Figure 2) with a duplicate barcode during initial interoperability implementation. Looking back on several months of data, the hospital found that this was the first time both smart infusion pump channels had been used simultaneously. 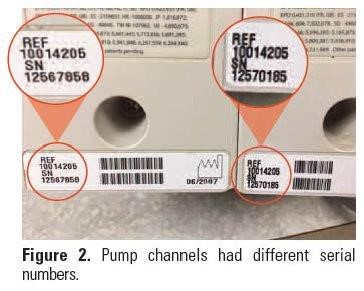 Safe Practice Recommendations: If you have implemented or plan to implement bidirectional smart infusion pump interoperability, establish a system to ensure an independent double check is conducted when any serial number barcodes are affixed to pump channels. In the hospital where the error occurred, all repaired channels also go through a verification process now that matches the barcode on the housing to the internal programming as well as the IT-applied barcode on the front of the pump.