Disrespectful Behavior in Healthcare: Has It Improved? Please Take Our Survey!

Disrespectful behavior has flourished in healthcare for years and has been silently endured or rationalized by staff who make excuses—“That’s just the way they are”—in an attempt to minimize the profound devastation that it can cause. In fact, disrespectful behavior occurs more frequently in healthcare than in other industries, largely because of the demands and pace of the dynamic, complex, and often stressful work environment along with dysfunctional hierarchies that nurture a sense of status and autonomy.1-3 Sadly, in healthcare, all forms of disrespectful behavior are commonly believed to be part of the job and an accepted occupational hazard.1 For these reasons, healthcare facilities are categorized as one of the most hazardous places to work.4

Disrespectful behavior encompasses a broad array of conduct, from aggressive outbursts to subtle patterns of disruptive behavior so embedded in our culture that they seem normal (Table 1).1-7 Some organizations label all forms of disrespectful behavior in the workplace as “bullying.” For example, the Workplace Bullying Institute (WBI) defines bullying as “repeated, health-harming mistreatment of one or more persons by one or more perpetrators,”8,9 and the American Medical Association (AMA) defines bullying as “repeated, emotionally or physically abusive, disrespectful, disruptive, inappropriate, insulting, intimidating, and/or threatening behavior targeted at a specific individual or a group of individuals that manifests from a real or perceived power imbalance and is often, but not always, intended to control, embarrass, undermine, threaten, or otherwise harm the target.”10 According to WBI, workplace bullying is status-blind harassment, but unlike its discriminatory cousin, it is not yet illegal in the US.9 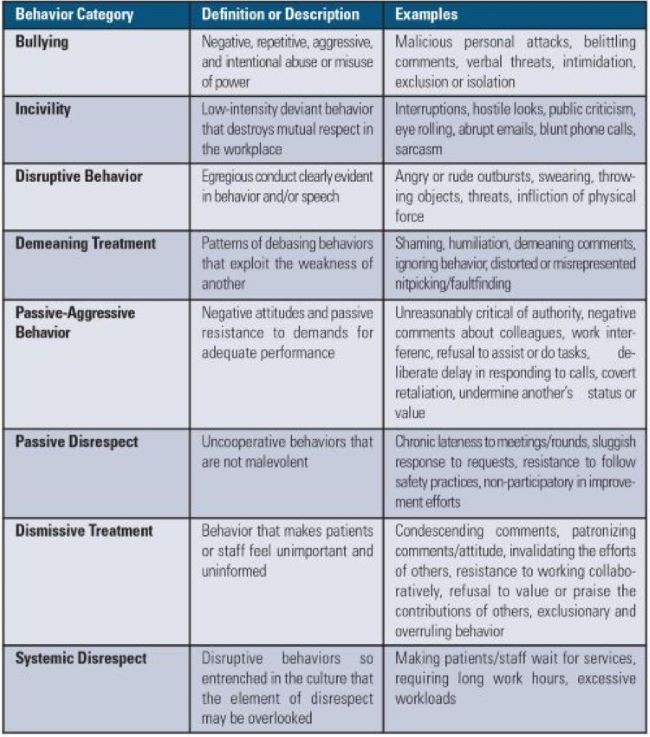 Disrespectful behavior occurs in all healthcare settings but is especially prevalent during stressful emergencies. Thus, disrespectful behavior tends to occur most frequently in the emergency department (ED), intensive care units (ICU), and perioperative areas. It is also prevalent in behavioral health units.9

The adverse effects of disrespectful behavior are widespread. On a personal level, disrespectful behavior can jeopardize an individual’s psychological safety, emotional health, and overall wellbeing through the involuntary onset of many harmful stress-related diseases.1-11 It causes the recipient to experience fear, vulnerability, anger, anxiety, humiliation, confusion, loss of job satisfaction, professional burnout, uncertainty, isolation, self-doubt, depression, suicidal ideation, and a whole host of physical ailments such as insomnia, fatigue, gastrointestinal discomfort, hypertension, palpitations, and chest pain. These adverse effects place individuals at greater risk of making human errors or not following procedures.1,3 Even common, everyday negative encounters can impair an individual’s cognitive function, lead to an inability to focus, reduce effective teamwork, and decrease the performance of technical skills. Just witnessing disrespectful behavior can impact an individual’s ability to think and make them less likely to want to help others.7 Disrespectful behavior also damages the individual’s professional identity, potentially limiting career opportunities and job promotions.1 Furthermore, individuals take these feelings home with them, affecting their home life and social relationships.1,3

On an organizational level, disrespectful behavior can significantly impact expenses and often creates an unhealthy or even hostile work environment.1 Lower staff morale, productivity, and attendance may lead to increases in employee attrition, exacerbating the current healthcare provider shortage and leading to increased operating costs and reduced financial performance.1-11 Unresolved incidents may lead to costly lawsuits. Disrespectful behavior also erodes professional communication, teamwork, and collaboration, which is essential to patient safety and quality.

To cite one example, a nurse had called a physician several times to ask him to come into the ICU to see a patient whose condition was declining. Each time, the physician became verbally abusive and refused to come into the hospital. After multiple attempts, the nurse hesitated to call the physician again despite the patient’s continued deterioration. By the time she called again, the situation was emergent. The patient was rushed to the operating room to stop internal hemorrhaging but died.15

ISMP continues to receive reports of adverse events related to disrespectful behaviors. One case involved a cancer patient who sustained serious tissue injury and thrombophlebitis after receiving intravenous (IV) promethazine via a peripheral vein in the hand. Several years before the event, the Pharmacy and Therapeutics Committee attempted to remove promethazine from the formulary in lieu of safer antiemetics. However, given his status and loud intense pressure, a surgeon “overruled” the otherwise undisputed action to remove the drug. At the time of the event, this surgeon was the only physician still prescribing promethazine.

According to the results of a 200317 and 201318 ISMP survey on disrespectful behavior, almost everyone who works in healthcare has a story to tell on this topic. Results of both surveys showed that disrespectful behavior was not an isolated event, was not limited to a few difficult practitioners, involved both lateral and managerial staff (not just physicians), and involved both genders equally. In 2003, 88% of respondents reported that they had encountered condescending language or voice intonation; 87% encountered impatience with questions; and 79% encountered a reluctance or refusal to answer questions or phone calls. A decade later, little improvement was seen in the 2013 survey.

Have disrespectful behaviors in the workplace lessened today? The World Health Organization (WHO) identified disrespectful behavior as a silent epidemic in healthcare; it is estimated that 50% of employees globally experience disrespectful behavior in the workplace.1,19 However, the true incidence of disrespectful behaviors is likely higher due to underreporting.1 In 2021, according to a WBI nationwide survey about the most serious forms of workplace bullying in all sectors, not just healthcare, 39% of employed Americans suffer abusive conduct at work, another 22% witness it, and 73% are aware that it happens.8 As found in the ISMP surveys, both genders were involved, and there was an even split between management and non-management perpetrators. Three-quarters of respondents reported that the most common reaction by employers to  complaints of mistreatment were negative; they either encouraged the behavior (18%), defended it (13%), rationalized it (12%), denied it (13%), or discounted it (7%). Encouragingly, the survey showed that negative outcomes for perpetrators is starting to rise, from 2% in 2003, to 11% in 2010, and 23% in 2021. Of course, the perpetrator’s rate of quitting (3%) is much lower than the victim’s rate of quitting (23%).

Sadly, healthcare has a history of tolerance and indifference to disrespectful behavior. These behaviors are clearly learned, tolerated, and reinforced in both the healthcare culture and the societal culture, where a certain degree of disrespect is considered a normal style of communication.5 Poor staffing levels, excessive workloads, power imbalances, subpar management skills, role conflict and ambiguity, ignorance of social inequalities, and bystander apathy are some of the factors that contribute to disrespectful behaviors.1,9-11,16 The 2021 WBI survey uncovered other factors associated with disrespectful behaviors, including the personality (personal problems) of the perpetrator, human resources/management response to complaints, and organizational retaliation for filing a complaint.8 Nevertheless, the stressful healthcare environment, particularly in the presence of productivity demands, cost containment, the hierarchal nature of healthcare, and a culture that nurtures autonomy, have likely been the most influential factors,1,10,16 along with an unfortunate progression of victims who, in turn, become perpetrators, feeling that they have no choice but to join in the practice. Sadly, disrespectful behavior has become a survival strategy for some victims—they feel they need to be aggressive to discourage anyone from coming after them.

Please Participate in the 2021 ISMP Survey

ISMP would like to measure the progress (or lack thereof) with managing disrespectful behavior in healthcare via a readership survey, which is similar to the surveys we conducted in 2003 and 2013. Please see page 5 (in the PDF) for the questions in the survey. We strongly encourage nurses, pharmacists, physicians, and other healthcare professionals to participate in the survey by clicking here. We estimate that it will take 15 minutes to complete the survey. Responses must be submitted by October 29, 2021. We will present the results of the survey in a future newsletter along with recommendations to prevent and correct disrespectful behavior.