Despite Technology, Verbal Orders Persist, Read Back is Not Widespread, and Errors Continue

In January 2017, we invited readers of our acute care, community/ambulatory care, long-term care, and nursing newsletters to complete an online survey to learn about the use of verbal orders that are spoken aloud (face-to-face), provided via telephone, or left on voicemail. The survey directed respondents to exclude verbal orders that occurred during order clarifications. We sincerely thank the 1,622 nurses (75%), pharmacists (23%), and other practitioners (2%) who completed the survey! Most respondents practice in a wide variety of hospital settings (87%), including medical/surgical units (31%), intensive care units (21%), inpatient pharmacies (18%), emergency departments (15%), procedural areas (14%), telemetry units (13%), and obstetrical units (7%). The remaining respondents practice in ambulatory clinics (6%), long-term care facilities (2%), community pharmacies (2%), or other facilities (3%).

ISMP conducted this survey to gain insight into the current use of verbal orders in today’s healthcare environment given the increased use of computerized prescriber order entry and electronic prescribing, which have the potential to reduce errors resulting from unclear handwritten and verbal orders. The survey results suggest that verbal orders are still used, and that the critical safeguard of reading back verbal orders for verification is limited. The potential for verbal orders to be misunderstood, misheard, or transcribed incorrectly makes them error prone, particularly given different accents, dialects, and drug name pronunciations by the prescriber and recipient of the order. Add in sound-alike drug names and dosing numerals (e.g., 50 vs. 15), background noise and disruptions, and the failure to seek verification, it is not surprising that errors with verbal orders continue to be reported. Further details about the survey results follow.

Read back verbal orders. The Joint Commission (TJC) includes a requirement under the Provision of Care, Treatment, and Services (PC 02.01.03, EP 20) for the receiver of a verbal order to record it and read (not repeat) it back to the prescriber. This helps assure that one has not only heard an order correctly but also transcribed it accurately. Nevertheless, nearly half (45%) of all respondents who reported receiving telephone or spoken orders told us they do this less than 50% of the time. In fact, 16% of respondents said they read back verbal orders only 1-5% of the time, and 9% indicated they never carry out this important verification process. A few respondents commented that their organizations require practitioners receiving verbal orders to repeat back, rather than read back, verbal orders, or that no distinction has been made between repeat back and read back. Others indicated that verbal orders are first written on scrap paper and read back, but then later transcribed or entered into the patient’s actual medical record. 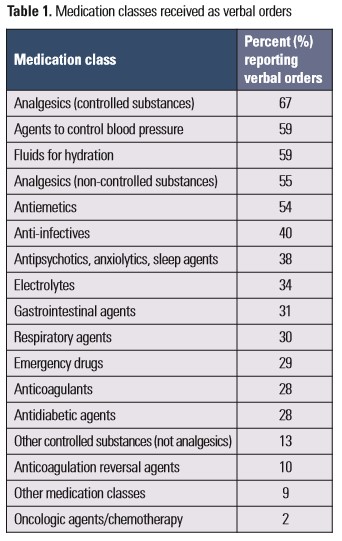 Classes of medications. Respondents also identified medication classes for which they have received verbal orders in the past year (see Table 1), some of which are high-alert medications. Analgesics, agents used to control blood pressure, fluids for hydration, and antiemetics were reported by more than half of the respondents. Despite being highly discouraged by ISMP, 2% of respondents reported receiving verbal orders for oncologic agents/chemotherapy in the past year.

Medication errors. Fourteen percent of respondents were aware of an error that occurred in the past year due to mishearing, misunderstanding, or incorrectly transcribing verbal orders. No trend emerged regarding the type of pharmacy or patient care unit where the errors occurred. Selected examples of the 211 errors reported by respondents are described in Table 2.

Because there are situations in which verbal orders are unavoidable during emergencies or sterile procedures, consider the following recommendations to reduce the risk of an error. 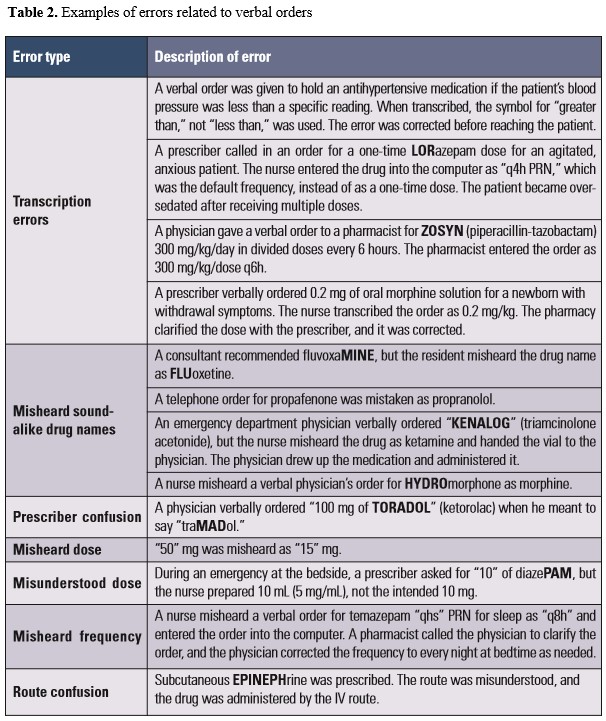 Limit to formulary drugs. If verbal orders are necessary, only allow them for items on formulary because the names and dosages of drugs unfamiliar to practitioners are more likely to be misheard.

Define the process. Define the prohibitions and limitations on verbal orders and when they are acceptable; a mechanism to establish the identity and authority of the prescriber; elements of a complete verbal order; and the requirements for clear communication of verbal orders, direct transcription into the medical record or onto a prescription pad, and the readback process for verification.

Clarify all communications. Avoid all drug name abbreviations and error-prone dose, route, or frequency abbreviations (e.g., U, IU, SC, QD). Spell out drug names, and for sound-alike drug name pairs, use a phonetic alphabet (e.g., “T” as in “Tango,” “C” as in “Charlie”). Communicate each single dose, not a total daily dose, and pronounce each digit of a number separately (e.g., “sixteen, one six,” to avoid confusion with “sixty”). When appropriate, use leading zeros but not trailing zeros when specifying doses.

Confirm patient and allergies. Before issuing the order, identify the patient using his or her full name and birth date, and confirm the patient’s allergies with the order receiver.

Speak clearly. Enunciate orders clearly and expect (or ask) the receiver to read back the order as transcribed in the patient’s medical record or onto a prescription pad. Provide the indication for the medication to help distinguish between sound-alike medications.

Provide complete orders. Include all elements of a complete verbal order, being clear about the unit of measure for each dose and the frequency of administration.

Provide weight-based doses. Include the mg per kg dosage along with the patient-specific dose for all weight-based neonatal and pediatric medication orders.

Request patient verification. To verify patient identification, ask the recipient to read back the patient’s name and birth date on the screen or order form/prescription pad that was used to transcribe the verbal order.

Read back the order. Read the order back to the prescriber for verification. This step is essential and should become habit even if the receiver is confident that he or she has initially heard the order correctly. Although TJC first required this safeguard in its 2003 National Patient Safety Goals, do not assume that this practice is widespread in your facility despite a longstanding policy. Assess how prevalent this practice is in your organization, and take any necessary steps to help practitioners fulfill this safety check. The readback process is perhaps the single most important strategy to reduce errors with verbal orders.

Understand the indication. Ensure that the verbal order makes sense in context of the patient’s condition. This helps to differentiate sound-alike drug names. Record the medication’s indication directly on the order or with the order.