Problem: Since 2019, ISMP has recommended the entry of a minimum of the first five characters of a drug name (unless the name has fewer than five letters) during searches in automated dispensing cabinets (ADCs) (Statement 4.4 in the ISMP Guidelines for the Safe Use of Automated Dispensing Cabinets) and other electronic forms of communication (Statement 19 in the ISMP Guidelines for Safe Electronic Communication of Medication Information). The use of only the first two to four characters of the drug name, mnemonics or short names (e.g., “met”), skipped character abbreviations (e.g., “mtx”), or a combination of the first few characters and dose (e.g., “meth10”) has led to the presentation of similar looking drug names on the screen, which has resulted in drug search selection errors. For example, entering “met” has led to mix-ups between methylphenidate, methadone, metOLazone, methotrexate, metFORMIN, and metroNIDAZOLE; and entering “ve” has led to mix-ups between vecuronium and VERSED (midazolam).

Recently, we received two error reports involving confusion between rocuronium and ROMAZICON (discontinued brand of flumazenil). One event occurred during cardio-pulmonary resuscitation in a critical care unit. When a physician gave a verbal order for rocuronium for intubation, a nurse logged into an ADC, selected the override function, entered “ro,” and accidentally selected and administered “Romazicon” to the arresting patient. Fortunately, the intubation and resuscitation were successful. As it turns out, rocuronium, the neuromuscular blocking agent, was not available via override as an individual drug; it was only available via override in a rapid sequence intubation (RSI) kit. In the other event, a head trauma patient in the emergency department, who needed urgent intubation, required an additional vial of rocuronium that the nurse did not know was available in the RSI kit the team was currently using. Again, only “ro” was entered into the ADC to access the medication via override, and “Romazicon” was selected in error and administered to the patient. The patient was still intubated successfully and experienced no permanent harm despite receiving the wrong drug.

Some ADC vendors have modified the functionality to allow organizations to require five characters when searching for drug names via the override feature. Based on practitioner comments on listservs and error reports, some organizations have implemented this functionality when using the override feature. However, we are also aware of several challenges, some of which have been present when entering two to four characters during drug name searches, but have been intensified with the five-character requirement:

Also, scrolling through an entire list of drugs using the inventory function rather than searching for a specific drug is one of the unsafe, time-consuming workarounds practitioners may take when searching for drugs via override if they are unable to find the intended product.

Safe Practice Recommendations: Despite these limitations and challenges, ISMP still recommends using at least five characters when conducting drug name searches. For drug names with the same beginning characters beyond five letters, you might want to consider adding the therapeutic class to the drug name listing to help avoid drug selection errors (e.g., methylPREDNISolone [corticosteroid], methylphenidate [stimulant], methylnaltrexone [GI agent], methylergonovine [ergot derivative]). Some have suggested that vendor functionality should be more tailored and specific to individual, problematic drugs that require the five-character search via override, rather than requiring an all-inclusive change for all drug name searches via override. Alternatively, functionality could exist to allow users to “opt out” certain drugs from the five-character search rule. However, it may be confusing to require two different levels of drug name searches, especially when staff are unable to remember whether they must search for a particular product using two or three characters or the full five characters. ISMP has previously talked to ADC vendors about developing more sophisticated functionality, such as an algorithm that allows users to enter the exact number of characters to get only one unique drug name to appear on the screen. Also, it might be safest to allow simultaneous drug name searches by either the brand or generic name.

It is also reasonable to consider creating an alias/synonym for certain drugs on the override list that are commonly known by an alias/synonym. For example, NSS <space> <space> may be created as an alias for 0.9% sodium chloride solution. But each synonym created should be reviewed against other aliases/synonyms to ensure they are not too similar. If there was enough room on the screen, it might also be helpful to allow users to “pin” emergency kits and emergency drugs (e.g., EPINEPHrine) to the top of the screen, similar to how certain posts can be pinned to the top of someone’s Facebook page. This would make emergency kits and key emergency drugs always accessible, although a separate code cart should always be maintained for emergency equipment and drugs to use during a cardiac and/or respiratory arrest.

As we recommended previously, before implementing the five-character search requirement for medications obtained from an ADC via override, hospitals should analyze the workflow, especially the searchability of emergency medications, and conduct a failure mode and effects analysis (FMEA) to identify and manage potential challenges. See Table 1 for examples of risk points to consider during the FMEA. Prior to implementation, organizations must develop a robust and effective communication plan, and obtain feedback from frontline staff. After any changes, collect data to assess whether unintended consequences are occurring and make appropriate adjustments if needed. Of course, to limit override challenges, whenever possible, orders should be entered and verified by a pharmacist to allow medication or product removal within the patient’s profile, bypassing the requirement to enter five characters.

Table 1. Examples of potential risk points that may intensify when requiring a five-character drug name search in ADCs 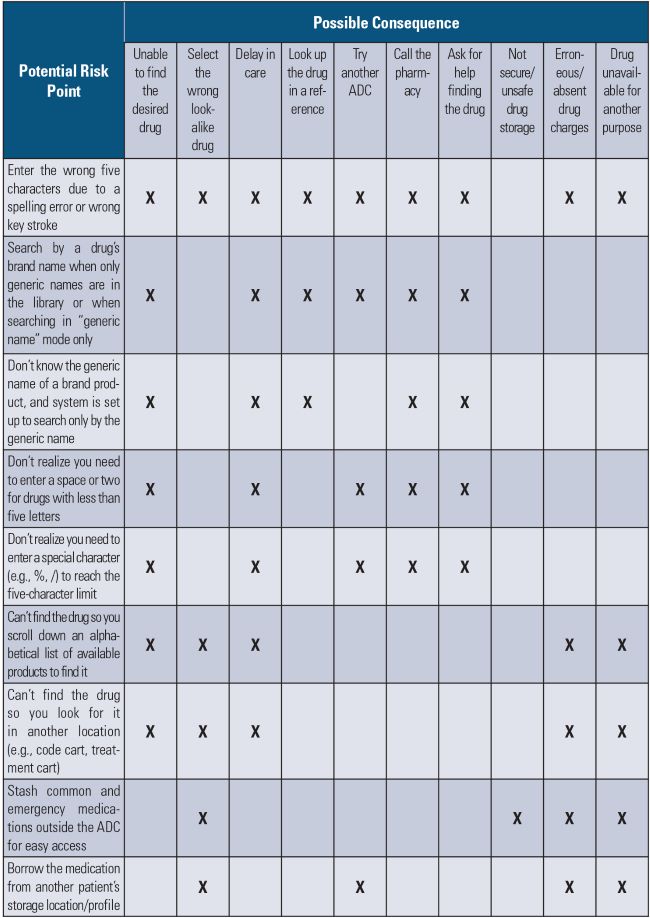