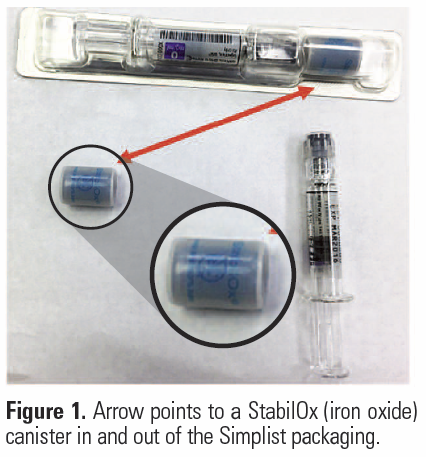 We learned of an incident last week involving an unopened DILAUDID (HYDROmorphone) prefilled syringe (SIMPLIST, Fresenius Kabi), which was brought into a room housing a magnetic resonance imaging (MRI) scanner. An MRI scanner has an extremely strong magnetic pull. The Simplist package contains a STABILOX canister that holds iron oxide, which serves to prevent oxidation of the drug (Figure 1). MRI staff need to be aware that the iron oxide in the canister is ferromagnetic. Ferromagnetic objects brought into the MRI scanner room can become a projectile. In this case, the magnetic pull from the scanner drew the Simplist package to the magnet with considerable force. No one was harmed in the incident, but the enclosed glass Dilaudid syringe apparently shattered. Both Dilaudid and morphine syringes in Simplist packaging have this StabilOx canister.

ISMP has not tested the canister in an MRI room although we did confirm its ferromagnetic properties with the StabilOx manufacturer, Multisorb, which told us that such an incident is possible. ISMP’s safety partner, ECRI Institute, which has MRI safety expertise, has been made aware of the incident, as well as Fresenius Kabi. ECRI Institute had not previously been made aware of any similar incidents. It is not known if other commercially available prefilled medication syringes contain ferromagnetic materials that might also be attracted by the scanner’s magnetic field. It should be noted that the magnetic properties are from the StabilOx canister and not the syringe itself or any of its components. The syringes contain no metal. The blister package has aluminum backing that is not ferromagnetic.

MRI facilities generally restrict access to the scanner by setting up four safety zones established by the American College of Radiology. Zone 1 allows unsupervised access to the public, such as the hallway outside the MRI suite. Zone 2 is also public but is a waiting area where patients and visitors are prescreened via questionnaire and interview. It is here where any metal containing objects should be identified and prevented from passing to Zone 3. There are ferromagnetic detectors built in the portal to detect packages with these canisters. Zone 3 is restricted to MRI personnel and screened patients, nurses and other staff and visitors. It serves as a final checkpoint to prevent ferromagnetic materials from entering the scanner room. A magnetic field may be detectable in Zone 3, which also allows access to Zone 4 through a single portal. Zone 4 is the scanner room.

MRI technicians should be informed of the above issue with Simplist syringes that contain StabilOx canisters so these items do not enter Zone 3 or 4. For inpatients, medication doses should be administered prior to transport to the MRI suite.

B. Braun recently announced a new presentation of potassium chloride for injection concentrate (2 mEq/mL) in a 250 mL EXCEL container plastic bag with blue and red labeling, and a blocked medication port. The 250 mL product is a pharmacy bulk package and should only be used in a pharmacy admixture
ISMP Alerts 01/03/2022

On December 22, 2021, the US Food and Drug Administration (FDA) issued an Emergency Use Authorization (EUA) for PAXLOVID, consisting of oral tablets of nirmatrelvir that are co-packaged with oral tablets of ritonavir (an FDA-approved antiretroviral agent). Indications Emergency use of Paxlovid is
NAN Alerts 12/06/2021

Ever since the US Food and Drug Administration (FDA) authorized the emergency use of a specific formulation (10 mcg/0.2 mL) of the Pfizer-BioNTech coronavirus disease 2019 (COVID-19) vaccine for children ages 5 through 11 years, reports of mix-ups with the Pfizer-BioNTech COVID-19 vaccine